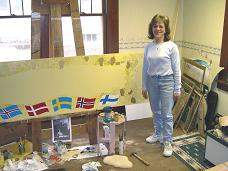 Karen Giesler Was the Artist
I approached Karen Giesler and explained the situation. She was amazed because she had been feeling called to do some Christian artistry and was searching for an opportunity. So the sign was commissioned.

Karen painted the five Scandinavian flags on the blessing sign. From left to right they are Iceland, Denmark, Sweden, Norway and Finland. They are all countries that have the cross as part of their national emblem. 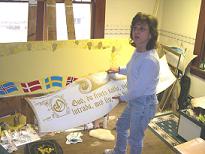 Karen Giesler places the Swedish blessing onto the sign

Work Progressed
I knew the sign was to be written in Swedish and I was quite unable to translate the blessing so I asked my friend Anders Bjorling, owner of the Swedish Kontur Imports store, to translate. I gave Anders the English version and he came back with a perfect Swedish translation. The blessing says, “Oh God, the giver of life, bless all who enter here with life, health and prosperity, amen.” 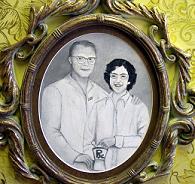 The image of my parents Bill and Joan Soderlund

Honoring Those That Left Their Legacy
So after Anders Bjorling gave me the translation I gave it to Karen Giesler to perform her artistry. Additionally I needed to place two images on the sign. One image was to be of my great-great Aunt Lina Soderlund and the other was to be of my parents Bill and Joan Soderlund. The thought behind this was from the Ten Commandments, which says to “honor your father and mother”. By placing their images upon the sign I felt it would be an honor to them and the legacy they have left to me. 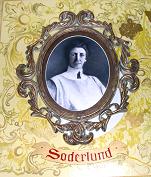 Lina Söderlund was the first pharmacist in the family

Lina Söderlund Began the Pharmacy Legacy
My great-great Aunt Lina Söderlund was born in 1879 and was the first pharmacist in the Soderlund family. I had the privilege of knowing her for several years before she went to be with the LORD. Her image was placed on the sign to honor her life and the legacy she left to our family. 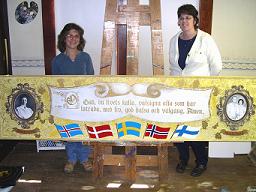 The Finishing Touches
Karen Giesler did a fabulous job of designing, creating and painting the sign. My wife, Beth Soderlund, and I went to her studio a couple of times to see the work in progress. I must say that I really felt the Presence while looking upon her work. 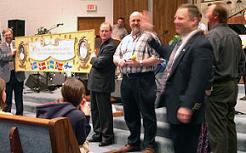 Pastor Greg Stone and the congregation pray over the sign 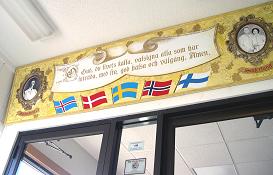 Look for the permanent home of the Swedish blessing sign

“Oh God, the giver of life, bless all who enter here with life, health and prosperity, amen.”