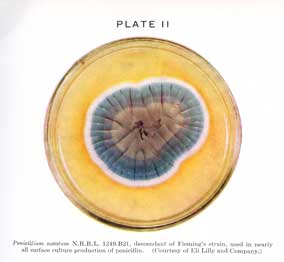 Penicillin is an Example of the Role of Pharmacognosy in Medicine

Most people don't realize that penicillin is actually a fungus that has very high anti-bacterial properties. Penicillin is a naturally occurring organism that man has identified as being of great importance in the treatment of bacterial infections. The beauty of antibiotics is that they selectively kill the pathogen but have little or no ill effect upon the person.

Antibiotics are derived from living organisms Sulfa drugs are not from living organisms and therefore are not technically antibiotics, though they are often referred to as such. When grandma used a moldy bread poultice on an infected finger it was because the molds that grew on the bread were often penicillin or penicillin like compounds that actually killed the infection. Grandma was pretty smart after all. 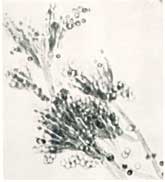 Penicillin Notatum as seen under a microscope

Penicillin was first found by Fleming in 1929. Later, in 1940, a group of Oxford chemists demonstrated its possibilities in medicine.

PREPARATION.—Penicillin is found in cultures of Penicillium notatum in small amounts. Definite strains of the mold are used and may be grown using either the surface or submerged culture method. Commercially it is extracted from these cultures by means of organic solvents such as ether, amyl acetate, chloroform and others.

USES AND DOSE.—Penicillin is most active on Gram-positive bacteria but the Gram-negative Neisseria species are notable exceptions. Largely due to the experience with the wounded and sick in the armed forces (1942 to 1946), it has been established that penicillin may be used successfully in the treatment of a wide variety of diseases, such as those caused by streptococci, staphylococci, gonococci, the bacilli of gas gangrene, and of anthrax, and actinomyces. Encouraging results are being obtained in the treatment of syphilis and also Well's disease.

Clinically there have been no serious toxic effects and in as much as penicillin contains variable amounts of impurities it is altogether possible those effects that are observed may be due to this fact. Chills, fever and urticarial conditions are the most common untoward effects.

Penicillin is usually combined with calcium or sodium for therapeutic use. These preparations are more stable and somewhat more slowly absorbed and therefore exert their effects over a longer period of time. Penicillin may be administered intramuscularly, intravenously, intrathecally, topically and orally. Penicillin in oil suspension may be injected in very large doses: 300,000 units, intramuscularly, and the effect will extend over two or three days.

Commercial penicillin is not a pure substance but a mixture of several fractions. At the present time, four of these are known and are designated in the United States as G, X, F and K. The relative amounts of these four fractions may vary in commercial penicillins. These fractions differ in their in vitro and in mw activity against a variety of bacteria. This condition leads to variable results in therapy. Manufacturers cooperating with the National Institute of Health are trying to improve the preparation of penicillin and produce a more uniform product.

STANDARDS.—Penicillin is standardized in terms of its antibacterial activity and for this purpose a unit of value originally used by the Oxford workers is now known as the Oxford or Florey unit. A unit is equivalent to the smallest amount, which when dissolved in 50 cc. of meat extract broth, completely inhibits the growth of the test strain of Staphylococcus aureus.
Pure crystalline sodium penicillin G having 1666 units per mg. has been designated as the international standard. The new international unit has been defined as "the specific penicillin activity contained in 0.6 microgram of the international standard."

Penicillin VK is the most common penicillin used orally today

When penicillin first came into use medicinally, dosing was quite low usually no more that 300,000 units for an adult with a serious infection. This was often given as oil based injection given only once.

As time has passed the bacteria have become resistant to penicillin at that level of dosing. Currently doses as high as 20-24 million units/day IV are used. This is the equivalent of 300,000 units per kilogram of weight.

Interestingly, several major antibiotics have been derived from dirt. Nystatin came from the soil of New York State and its name reflects its origin. Lincomycin was derived from the dirt in Lincoln Nebraska. When pharmacy researchers went to various parts of the world they were asked to collect a sample of dirt to see if there were any microorganisms that could be used to fight infection. These are just a few examples of antibiotics that have helped both man and animal thanks to the science of pharmacognosy!

The following information is taken from...
“PHARMACOGNOSY” By Gathercoal and Wirth, Second Edition 1947