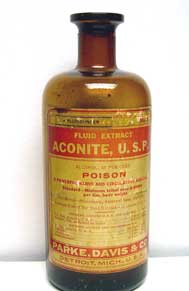 Fluid Aconite made by the Parke, Davis & Co.

Aconite
The bottle of "Fluid Extract of Aconite, U.S.P." was manufactured by the Parke, Davis & Co. in Detroit Michigan.

The bottle lists a recipe for tinture of aconite from the U.S.P. from 1914. It says to use 1 ounce of the aconite extract then q.s. to 500 cc's with Alcohol 70%. The normal dose is claimed to be 0.03cc. The bottle is labeled "Poison... A powerful nerve and circulatory sedative" Antedotes are listed on the bottle as well and say to use "Stimulants, external heat, digitalis"

"Aconite is the dried tuberous root of Aconitum Napellus Linne (Fam. Ranunculacetz). The potency of Aconite shall be such that 0.1 Gm. of it, when extracted and the extract assayed as directed under Tinctura Aconiti shall possess an activity equivalent to not less than 0.150 mg of reference aconitine. Aconite contains not more than 5 per cent of its stems and not more than 2 per cent of other foreign organic matter." N. F. The Br. definition differs in omitting the statement concerning lethal dose.

The name Aconite is derived, according to Pliny, from the ancient Black Sea port, Aconis. Some species of aconite was used by the ancient Chinese as well as by the hill tribes of India. While the physicians of Myddvai indicated the importance of aconite as a remedy during the 13th century, it was introduced into modern medicine by Storck, of Vienna, in 1763. The drug was admitted into the London Pharmacopoeia in 1788 and into the first U.S.P. The genus Aconitum is a relatively large one, there being some sixty well-defined species, nearly half of which have been used in medicine. The species which is official and recognized by nearly all the Pharmacopceias is Aconitum Napellus. It is indigenous to the mountainous regions of Middle Europe and is found growing in the Alps, Pyrenees and mountainous districts of Germany, Austria, Denmark, Sweden and Siberia, its range extending eastward to the Himalayas. It is not found in India, according to Dutt, the nearest approach to it there being A. soongaricum. The pure species occurs wild in North America as an escape from cultivation.

Uses.—Aconite was well known to the ancients as a powerful poison; it appears to have been used as an arrow poison early in Chinese history and perhaps also by the inhabitants of ancient Gaul. Although mentioned in the Meddygon Myddfai, published in Wales in the 12th century, it was introduced into regular medicine by Baron Störck of Vienna, whose experiments were published in the year 1762.

Locally aconite is actively irritant and also a paralyzant to the peripheral sensory nerves. When applied to a mucous surface it produces at first a burning tingling sensation followed in a few minutes by a numbness. This sensation may even be perceptible after the systemic ingestion of very large doses. When administered internally the first effect is generally a slowing of the pulse due to stimulation of the cardio-inhibitory centers, with consequent fall in the blood pressure and usually some slowing of res-piration. With large doses, in the lower animals, the slow pulse suddenly becomes irregular and rapid with further fall of the blood pressure. These irregularities are apparently due to excita-tion of heteropic (misplaced) impulses in the heart (Hueber and Lehr, A. E. P. P., 1938, 189, 25). The heart becomes more and more irreg-ular and eventually passes into fibrillation. According to Hueber and Lehr, magnesium antagonizes these cardiac irregularities and should therefore be useful in aconite poisoning. Aconite increases the toxic effects of calcium and digitalis on the heart. Wolffe and Munch (7. P. Ex. T., 1934, 51, 471) believe that the cardiac arrhythmia is due to the aconitine and they report that aconine will slow the pulse but not cause irregularities. There is apparently great variability in the potency of aconite; thus Wolffe (A. Ph. A. Monograph 1, 1938) gave from 20 to 60 drops of an official tincture to a number of patients with no apparent effect. In the frog, large quantities of aconite produce a loss of reflex activity, which is apparently due to a paralysis of sensation as voluntary motion is preserved for some time later, although it too may eventually be abolished. The drug appears to affect both the sensory nerves and the receptive side of the spinal cord, although the latter is in-volved comparatively late in the poisoning. In mammals this depressant action upon the nervous system can scarcely be demonstrated because of the powerful" depressant effect upon the circulation.

Aconite was also formerly employed for its local effects. The combination of local irritant effects with anesthetic action suggests strongly its use in peripheral neuralgias. It must not be forgotten, however, that if used too freely for this purpose it may be absorbed through the skin in sufficient quantities to cause serious poisoning. It is also occasionally employed as a local anesthetic to the stomach in various types of vomiting or gastralgia but on account of its systemic effect is of secondary value.

For internal use the best preparation is the tincture, which may be given in doses of from five to fifteen minims (0.3-0.9 cc.). For external application a fluidextract may be employed, but generally an ointment is preferred. This may be made by rubbing up the extract with two or three parts of lard. The U. S., 1870, recognized a plaster of aconite.