The following advertisement appeared in the American Druggist magazine 1934.  It shows that condoms were only allowed to be sold in pharmacies.  Historically, condoms were "controlled".  The following shows the history of condom sales.

In 1934 on a pharmacist could legally sell condoms from the pharmacy.  They were kept in a drawer or cabinet in a private area since it was a risque enterprise.

Shall Trojans be Nationally Advertised?

The answer is NO! 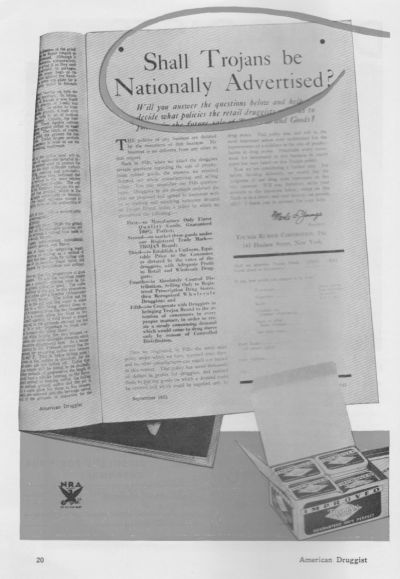 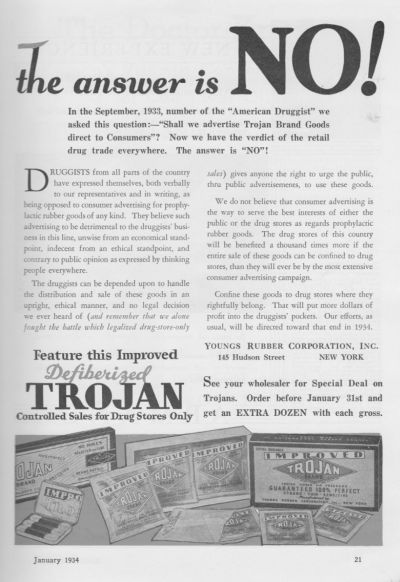 In the September, 1933, number of the “American Druggist” we asked this question:-"Shall we advertise Trojan Brand Goods direct to Consumers”?

Now we have the verdict of the retail drug trade everywhere. The answer is “NO”!

DRUGGISTS from all parts of the country have expressed themselves,

both verbally to our representatives and in writing, as being opposed to consumer advertising for prophyactic rubber goods of any kind. They believe such advertising to be detrimental to the druggists business in this line, unwise from an economical standPoint, indecent from an ethical standpoint, and contrary to public opinion as expressed by thinking People everywhere.

The druggists can be depended upon to handle the distribution and sale of these goods in an upright, ethical manner, and no legal decision we ever heard of (and remember that we alone sought the battle which legalized drug-store-only sales) gives anyone the right to urge the public, thru public advertisements, to use these goods.

Confine these goods to drug stores where they rightfully belong. That will put more dollars of profit into the druggists' pockets. Our efforts, as usual, will be directed toward that end in 1934.

See your wholesaler for Special Deal on Trojans. Order before January 31st

Controlled Sales for Drug Stores Only get an EXTRA DOZEN with each gross.

Notice the National Recovery Administration NRA symbol at the bottom of the advertisement.