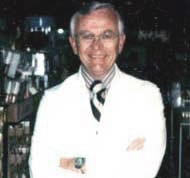 Swedberg Exemplifies the Practice of Pharmacy
Included on this site is the history of a great pharmacist that I have had the privilege to learn from. I became a pharmacist because of him. His name is Robert P. Swedberg, R.Ph. I just can't think of anyone better to illustrate the ideal and epitome of the practice of pharmacy from the 1950's through the 1980's.

Bob Swedberg has a great combination for success… Intelligence and wisdom. One time Bob relayed to me a proverb that I have remembered to this day… “Patience will prevail”. I have drawn upon that wisdom many times in the last 18 years! That’s just one example of the wonderful man Bob Swedberg is. He is always ready to help his fellow man. 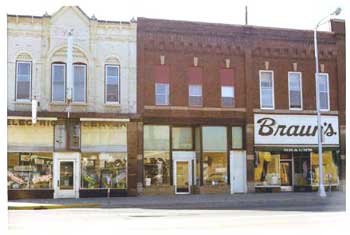 The exterior of Swedberg Drug prior to remodeling

Bob Swedberg Comes to Saint Peter Minnesota
Bob Swedberg graduated from the University of Minnesota College of Pharmacy in 1951 at the top of his class. He went to work for John Thro in Mankato Minnesota, working 64 hours per week. In 1955 Bob decided to purchase Schaefer Brothers Drug in Saint Peter Minnesota. John Schaefer needed to sell the drugstore after his brother Peter Schaefer died. Peter Schaefer was the pharmacist and back then you needed to be a registered pharmacist to obtain or hold a liquor license. And liquor, not prescriptions, was the majority of the Schaefer Drug revenue by that point.

Bob Swedberg bought the store in April 1955. Surprisingly, Schaefer Drug hadn't filled a single prescription since 1927 but because they had a liquor license the Schaefer Brothers kept in business by selling alcohol. 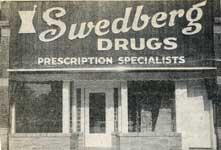 Bob Swedberg made major changes to the pharmacy

Bob Swedberg Opens Swedberg Drug in 1955
Bob Swedberg opened his pharmacy on May 1st, 1955 and filled 20 prescriptions his first day of operation. This was quite an accomplishment since Schaefer Drug had no prescription patients. Bob had developed a reputation as a pharmacist in Mankato and was able to build upon the credibility he had developed over the previous years.

There were two other pharmacies in Saint Peter at the time. Bob Faust owned Faust Drug which his father had started. Previously, Faust Drug was called Poetz Drug. The other pharmacy in Saint Peter was Dry Pharmacy owned by Larry Dry who was also the president of the Minnesota Pharmacists Association. Even though Bob Swedberg had stiff competition and was basically resurrecting a pharmacy from scratch, determination and wisdom lead to his success in the Saint Peter community.

The Grand Opening
Bob Swedberg placed the following ad into the Saint Peter Herald to announce the grand opening of his drugstore. The ad said, "Your health is Priceless" We invite you to visit our modern prescription department. Depend on us to fill your prescription exactly as your Doctor orders, using only the freshest, purest drugs." grand opening was Friday Sept 23, 1955.