Frontier Drugstores of Saint Peter Minnesota
The following information is taken from an issue of the Saint Peter Herald from 1930. This particular issue highlighted that years prominent businesses located in St. Peter.

One of St. Peter’s oldest established business institutions is the J. A. Poetz drug store, which enjoys a personal following and patronage that has grown steadily through the years as the result of splendid service and high class goods. Mr. Poetz came here 34 years ago from Winthrop, where he had been engaged in business, buying out the James Bennett store. To this venture he has since devoted himself wholeheartedly and with marked success. The store has kept pace with modern trends at all times, and today is a model institution devoted to public service. In addition to his business duties, Mr. Poetz has always found time for community activities. Mr. Poetz is one of, the founders of the chautauqua, and no worthwhile movement has lacked his support. The store was operated for 30 years in the Bennett bldg., now owned by L.L. Blender and four years ago was moved to the Hodgkins building. The building was erected 30 years ago on the site of the old Woods tin shop and Holmberg’s restaurant. Previous to its occupancy by the Poetz store occupied by the Citizens State bank, which failed in 1924, and previously by Satory’s drug store.

Aconite was formerly used topically to reduce pain but overuse caused toxic effects. It affects the CNS as well as the cardiovascular system leading to death. Currently it is used in homeopathy.

One of St. Peter's veteran business establishments is the Schaefer Bros., drug store which has been operated here continuously since 1900 by John and Peter Schaefer. Previous to 1900, John Schaefer conducted a newsstand at this location, and that year Peter Schaefer disposed of a drug store he had operated at Good Thunder for some time to return to his old hometown. They then purchased their site from Peter Miller, [and] removed [the] old frame building that was the newsstand, and built their modern structure. It is now one of the city’s substantial buildings and a contribution to local progress. In addition to a line of drugs and sundries, this firm has the pioneer news agency of this city, and for years has operated a daily newspaper route here.
[Taken from an issue of the Saint Peter Herald from 1930. This particular issue highlighted that years prominent businesses located in St. Peter.]

John R. (Rudolph) Faust purchased his pharmacy from J.A. Poetz. When Rudolph died on 02/20/1949 in Nicollet County his son Robert "Bob" Faust took over the drugstore and ran it for several years. After Closing "Faust Drug" Bob Faust became the pharmacist at the Saint Peter Community Hospital. I need more info so I welcome any input! 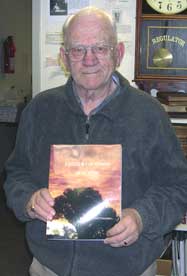 Special Thanks to Bob Wettergren

I would like to that Robert Wettergren for his help in compiling this information. Mr. Wettergren is one of the descendents of the original settlers to Saint Peter. He has spent his life interviewing people, researching and writing about the history of Saint Peter, Minnesota. Without his help this information would not be available.

Bob Wettergren was the president of the Saint Peter, Chamber of Commerce for 20 years. He loves the St. Peter community and the history of this Mid-western town. Bob spent many years writing a book titled "A Little Bit of Heaven in St. Peter". He is shown holding a copy of his book that he autographed for me. One afternoon in November 2004 he spent with me explaining some of the historical druggists from St. Peter. I have truly enjoyed the time I have had the privilege to spend with Mr. Wettergren! The conversations have been priceless...