History of the Soda Fountain

Artist rendering of soda fountain circa 1890

The History of the Golden Age of Soda Fountains

The soda fountain that has become part of the American imagination really began at the turn of the 20th century and continued until it completely collapsed in the 1970’s. While there were certain purveyors of sodas and ice cream previously it was the marriage of the drugstore and soda fountain of the early 1900’s that gave birth to the American soda fountain.

The golden age of soda fountains began in the early 1900’s and continued until the 1950’s. It was during that period that pharmacists were the operators of their own drugstore and soda fountain. Just after prohibition began John Somerset wrote, in Drug Topics June 1920 issue that, “the soda fountain is the most valuable, most useful, most profitable, and altogether most beneficial business building feature assimilated by the drugstore in a generation… “ “In the face of present pyramiding taxes and overhead, like wise the increased demand for soft drinks resulting from prohibition, can (one) fail to see which way the wind is blowing… and become a soda fan quick!” Somerset went on to say, “The bar is dead, the fountain lives, and soda is king!” 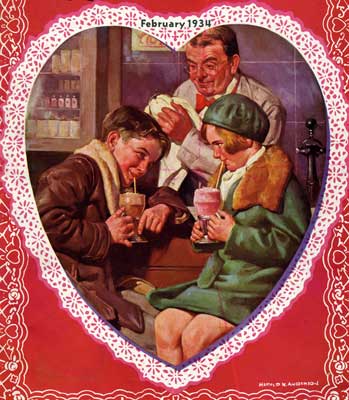 The birth of the soda fountain began with the drug revolution of the 1850’s. People would go to the local drugstore and procure a fountain drink to cure or aid some physical malady. Many of the fountain drinks were concoctions or extracts of various drugs that were flavored and effervesced to make them palatable. Drugs like cocaine and caffeine are maybe the most famous but bromides and various plant extracts were also commonly dispensed.

Many of the fountain drinks made by those early druggists contained cocaine and caffeine. The combination of cocaine and caffeine was used to effectively cure headaches. The problem was that rebound headaches would ensue and the patient would be back frequently for another drink to get rid of the pain.

The soda fountain was really a place to go to get lit up to get some “pep”. Doctors, druggists and the public at large believed that stimulants were very good. These new drugs were looked upon as completely safe and effective. Many druggists even made and marketed their own secret formulations… some even mass marketed these.

Prior to 1914 every drug was basically “over the counter” so no soda fountain broke any law by selling cocaine derived drinks. That all changed when the “Harrison Act” became law in 1914. The “Harrison Act” banned the use of cocaine and opiates in over-the-counter products. 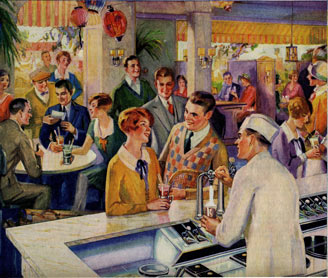 Soda drinks began to be viewed as “habit forming” and eventually became looked down upon. The “soda fountain” developed a reputation for serving intoxicating beverages. Many pharmacies began to distance themselves from the bad reputation that developed as result of the “habit forming” products sold from the 1860’s through the early 1900’s. Jacob Baur, founder of the Liquid Carbonic Company, used the following in an advertisement for one of his soft drinks, “it isn’t medicinal, won’t cure anything… isn’t intoxicating or habit forming – it’s just flavory, fruity, snappy, sparkling, delicious.” It is interesting to note that a soda fountain would advertise as “isn’t habit forming of intoxicating. The soda fountain eventually lost the old reputation and became known for serving “soft drinks”.