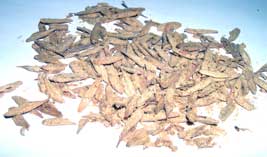 Strophanthus belongs to that group of cardiac poisons
Strophanthus belongs to that group of cardiac poisons of which digitalis is the type and botanically to the dogbane family, native to Africa and Asia. Its effects upon the circulation are so similar to that drug that it is only necessary to note the points of difference. Strophanthus is somewhat more rapid in its action and decidedly less permanent than digitalis; it causes relatively less reduction of the pulse rate and is generally believed to have less influence on the vasomotor mechanism. It appears to be absorbed from the intestinal tract with much less regularity than digitalis and therefore is less certain in its effects. Be-sides its action upon the circulation, strophan-thus has a marked influence on intestinal peris-talsis, according to Magnus (A. G. P., 1905, 108, p. 1), causing increased peristalsis and tone and under certain conditions tetanic spasm of the intestines. Probably because of this action it frequently produces diarrhea when used clinically. According to the early researches of Fraser it exercises a similar influence on all forms of muscle tissue including voluntary muscles. It is by some believed that strophanthus has a direct stimulating effect upon the kidney and is superior to digitalis as a diuretic, but the evidence in favor of this view is far from convincing. While it possesses some local anesthetic powers it is so highly irritant that it is practically unavailable for this effect.

Medicinal Uses of Strophanthus
Strophanthus is used in medicine solely for its influence on the circulation, especially in cases of chronic heart disease. It is of value in exactly the same class of cases in which digitalis is em-ployed and, although more likely to cause diges-tive disturbances, is frequently useful as an alter-native or adjuvant to that drug. In cases of threatening urgency the effects of strophanthus upon the circulation can be obtained almost im-mediately by means of the intravenous injection of its active principles (see Strophanthinum).

Uses. Strophanthus contains cardiac glycosides similar to those of digitalis and it resembles digitalis in its action though it is less reliable. The effects of the Strophanthus glycosides begin more rapidly and are of shorter duration and less cumulative. Strophanthus is seldom used therapeutically. It has been employed as an extract and as a tincture but it is principally used as a source of strophanthin-K.

Strophanthus versus Digitalis
The question of the relative variability of potency in strophanthus as compared to digitalis cannot as yet be definitely answered. Although certain German investigators have claimed that strophanthus is more subject to wide range in power, Hatcher and Bailey (/. A. M. A., 1909, 52, p. 5) have found that the tincture of stro-phanthus is much more uniform in this country than the tincture of digitalis. Edmunds and Lovell (/. A. Ph. A., 1929, 18, 568) found that the tincture was subject to the same type of deterioration as that of digitalis.
Dose, of strophanthus, one-fourth to one grain (0.016-0.065 Cm.).
Off. Prep.—Tinctura Strophanthi, N. F., Br.