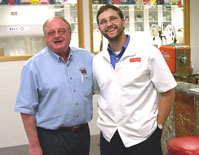 Al Arneson of Sleepy Eye came up with the formula for 1919 Root Beer a few years back. 1919 Root Beer is the best root beer made! Al Arneson stopped by Soderlund Village Drug to see the soda fountain exhibit so we took his picture. Al Arsenal's son Toby Arneson is walking in his dad's footsteps to carry on the family business of making 1919 root beer. Let me be blunt! No matter how you spell it, 1919 root beer, 1919 rootbeer of just root beer, the Arneson family has the market tied up when it comes to consistently great taste. They have no equals. They don't even have any competition. 1919 ROOT BEER IS SIMPLY THE BEST ROOTBEER EVER BREWED! PERIOD! When you say root beer you have to mean Sleepy Eye's finest, 1919 Root Beer! Thanks Al and Toby Arneson! You give us one more thing to be grateful for!